In September of 2008, a new book warning against blind faith in our most trusted financial institutions began its climb up the New York Times bestseller list.

The timing seemed eerily prophetic. Because the very same month the book began its rise, financial markets began their tumble down.

On September 14th, Merrill Lynch agreed to sell itself to Bank of America at a firesale price to avoid collapse.

On September 18th, the President’s top appointed officials met to design a bailout of the banks.

On September 19th, money market funds, long considered one of the safest investments, experienced a “bank run” — with withdrawals jumping from $7.1 billion to $144.5 billion in the space of a week.

And as the economic storm rained down, Americans continued to push this new book up the New York Times bestseller list.

The book is called Killing Sacred Cows: Overcoming the Financial Myths That Are Destroying Your Prosperity. And it’s co-written by our Chief Wealth Strategist at Wealth Factory, Garrett Gunderson, who spent that wild September doing a media-blitz to support the book.

Garrett appeared on Fox Business with Neil Cavuto, Bloomberg.com, the Wall Street Journal and radio shows across the country to share this message with the world: the entire financial industry is built to benefit big banks and Wall Street at your expense, and financial “sacred cows” like 401(k)s and IRAs were not the no-brainers people think they are.

Those who didn’t listen to Garrett’s advice wished they had.

Within 6 months, the Dow Jones fell 43% on the New York Stock Exchange.

“What kind of retirement plan allows millions of people to lose 30-50% of their life savings just as they near retirement?”

And just like that, the Wealth Factory revolution began.

Is This Any Way to Grow Wealth?

Killing Sacred Cows struck a chord because it put an end to 9 myths the financial industry spent decades pounding into our collective heads. Myths like:

“If you want high returns you must accept high risks.”

“Don’t worry if you’re losing money, you’re in it for the long haul!”

“Save, sacrifice and defer so someday, 30 years down the road, you can enjoy life.”

“Although myths create dilemmas, these dilemmas are easy to work through once we educate ourselves to see the truth of the situation and realize that we have infinitely more options than we’ve been told.”

Because of these myths, financial planning has become synonymous with stuffing money into 401(k)s and IRAs full of mutual funds — then waiting 30 years for the magic of compound interest to kick in.

It’s a 30-year-long bet on the markets that, if you get wrong, there’s no time left to start over.

And recent events show it’s a dangerous time in history to make this bet.

The Truth About Markets in 2016

Since the stock market crash of 2008-09, you may know that markets have climbed their way back with the help of unprecedented money-printing.

Even so, markets are not living up to the legend.

Retirement planners will tell you the stock market averages 8-11% returns per year — or 5-8% per year inflation-adjusted. That may have been true last century, but this century has seen that turned into fiction.

From 2000 to 2015, the Dow Jones was up just 8.4% total when adjusted for inflation, or 0.56% per year.* And that was after a substantial market rally. So not only was the Dow not returning 8% per year, it barely returned 8% total after 15 years. (That’s even more devastating when you remember that 15 years is half of your 30-year bet.)

It gets worse. In the early months of 2016, the Dow Jones gave up all of its inflation-adjusted gains since the year 2000.**

There’s no disputing it — the stock market is barely even keeping up with inflation this century.

“Most people who place money in the stock market have no idea what their money is doing, no idea what kinds of returns they can expect, no mechanisms for reducing risks, and no idea of how they are creating value in the world. The way most people ‘invest’ is like someone who, after playing craps at a casino, makes bets based on how he has seen other players win. Yet the financial pundits continue to refer to these people as “investors”—and the “investors” continue to feel good because they’re doing what everyone else is doing and don’t have to think much about it.

“Anything that involves such a high degree of risk and uncertainty is nothing more than gambling. I define investing as anything we do that we can control, of which we have intimate knowledge such that risk can be mitigated to near zero, and which will safely yield a profit.”

And then there are the fees…

That doesn’t sound so bad, until you do the math. The chart below shows the interest earned on a $100,000 investment over a person’s lifetime, starting at age 20. 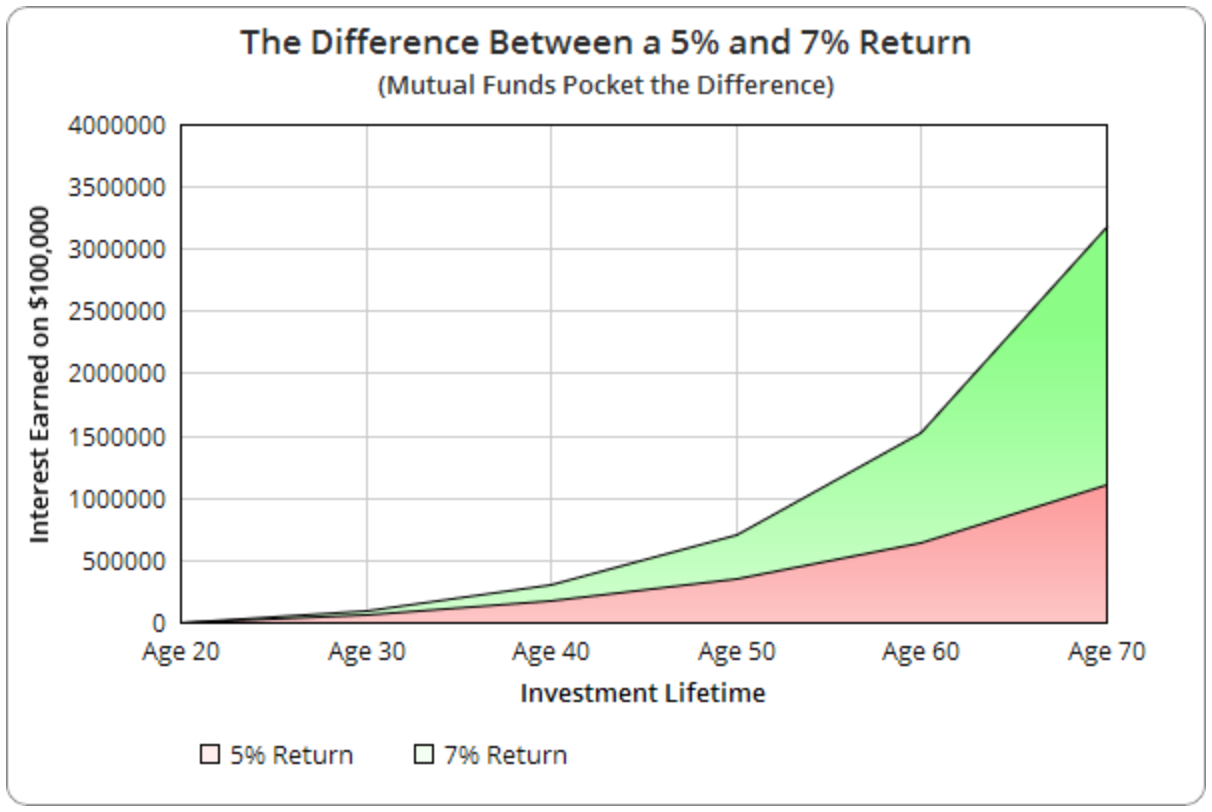 At age 70, a 7% return is so much greater than a 5% return that the mutual fund actually ends up with two-thirds of your gains.

Jack Bogle, the founder of Vanguard says this about mutual funds: “Do you really want to invest in a system where you put up 100% of the capital, you take 100% of the risk, and you get 30% of the return?”

“The financial institutions, meanwhile, have wisely and deliberately transferred their risk to ‘investors.’ If you have $1 million in mutual funds, and lose $200,000, the mutual fund company is still going to get paid through their fund fees; they get paid by getting you to invest and taking a percentage of everything you invest, regardless of how their fund performs.”

Fortunately, as an entrepreneur and business owner, it’s easy for you to reject this system.

How the Entrepreneur’s Advantage Beats the Markets

As an entrepreneur and business owner, you have a unique advantage over everyone else when it comes to wealth.

Your entrepreneurial instinct makes it easy to see through the myths exposed by Killing Sacred Cows. And it’s easier for you to avoid tumbling markets.

There are two reasons why:

First, the whole world told you to go to college to learn to be a good employee who faithfully funds a 401(k) or IRA.

But somewhere along the way, you broke the mold. You took the road less traveled and started a business.

While everyone else got in a single-file line and did as told, you stepped out on your own. And even today, you don’t do anything just because “everybody’s doing it.”

Reason #2 is that, as an entrepreneur, you have a deep understanding of cash flow.

“When it comes to monetary prosperity, cash flow, not net worth, is the single most important indicator of our financial health and success.”

You know that cash flow is the lifeblood of your business and must be watched closely.

So when a retirement planner asks questions like, “How much money do you need to save to retire?”, you know that they’re expecting you to save a big pile of money to be spent down in retirement.

But as a business owner, you know that living off savings means negative cash flow. That would mean your expenses are higher than your income, and that’s the definition of insolvency.

This faulty model is nothing but planned bankruptcy, and yet it’s popular with retirement planners everywhere. No wonder so many people fear outliving their money.

As the markets came tumbling down in September of 2008, Killing Sacred Cows showed that there’s a better way.

Rather than taking money out of your business and investing in someone else’s business through the markets — you can invest to empower your soul purpose, your human life value and enhance your cash flow.

“In short, Soul Purpose is the mission that you were born to fulfill, and every individual was born with a unique and powerful Soul Purpose.”

Plus, when you invest in yourself, you create wealth today rather than wait for it to appear in 30 years:

“Rather than believing in the myth of throwing money into investment accounts and hoping that it will realize a return after a long waiting period, we can utilize our assets to immediately provide as much value for as many people as possible. Utilization means we stop waiting for financial freedom to come to us and instead become proactive in creating it ourselves, right now.”

So instead of cutting back, sacrificing and delaying happiness to save a big pile of money, Killing Sacred Cows teaches us to invest in our ability to produce more, to provide more value to others, to grow our cash flow and to live wealthy today — not 30 years down the road.

Please Take this Complimentary Chapter of Our NYT Bestselling Book

On behalf of Wealth Factory, we’d like to give you this free chapter of Killing Sacred Cows:

And click here to print your free chapter summary

The timeless advice inside is just as important today as it was in September of 2008 — maybe even more so.

If you’ve ever wondered or worried about half of your savings disappearing overnight in the markets, this is the chapter to read.

And if you’ve ever wanted to live wealthy today (and tomorrow), rather than hoping to live wealthy 30 years down the road (if markets cooperate), then this is the chapter to read.

After you’ve read the chapter, print out the chapter summary and keep it some place safe.

Read the chapter. Think about it. Talk it over with a spouse or friend.

And then be on the lookout for more financial wisdom from Wealth Factory that you won’t find anywhere else.

Next up is how to retire IN your business in as little as 2-7 years, and you won’t want to miss it.

“Financial success is the product of finding and applying universal principles. It is available to every one of us. It is achievable. It is integral to our progress and development as creative beings with infinite potential. If we can train ourselves to question and attack the myths that are limiting our potentials, we can be infinitely prosperous.”

(Note that the calculation was done on January 14, 2015, using the BLS inflation calculator. Today, you will get a slightly different number due to the calculator utilizing inflation data from all of 2015, not just January.)